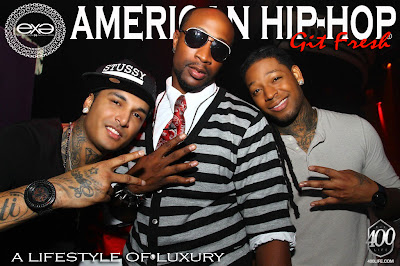 In a time where cultures are merging more than ever, diversity has enriched our world in many ways, especially in the form of music. Hailing from three distinctively different backgrounds, the members of I.M.G./ Def Jam’s Git Fresh have made a name for themselves by seamlessly blending their backgrounds to create a super group that is determined to change the face of popular R&B.


“Together our cultures combine and give us a different sound and a different look than you would see in a typical R&B group,” Penny. “We all come from different backgrounds,” Rude Boi. “Me, I’m African American. Pretti Sly is from South Africa and Penny is White. Each member’s influence on the group is different.”
Hailing from Ft. Lauderdale, Florida, Penny and Rude Boi met in high school at the Dillard School of the Arts. There, they studied various performing arts including musical theatre and vocal training. “Our school was predominantly Black so that developed my interest in hip-hop and R&B and helped my swag,” says Penny. “We had a gospel choir in our school that I was a part of and that was really a big help in me learning different vocal arrangements and chords.”
Meanwhile, Rude Boi met up with Pretti Sly soon after he relocated to the US from South Africa. “As soon as I got here, I met Rude Boi at a talent show and we decided to form a group with Penny” says Sly.
In their first years of high school, the boys created the group Deep Side and instead of keeping their combined talent under wraps, they planted themselves in the center of the teenaged universe. “Every Saturday and Sunday we used to be just performing inside the mall,” says Rude Boi. “If we’d see pretty girls walking by, we’d stop them and sing for them.” The guys also entered local talent shows, where they were approached by their former manager who was their first ticket into a legitimate recording studio.
Not long after, Deep Side was invited to perform in Chicago at R. Kelly’s birthday party. At the time, they had recorded a song called “Shook” which was getting radio play in select markets. R. Kelly was thoroughly impressed by the young group’s performance and connected them to his A&R Wayne Williams who was signed the guys to their first label deal. Two years later, the group decided to leave the label and break ties with their former manager and head out once again on their own.
In 2008, the guys moved to Atlanta and wrote and recorded “Booty Music” under their new group name, Git Fresh. The highly addictive hit quickly picked up hundreds of spins in major markets across the country. It wasn’t long before the boys were fielding calls from multiple major labels. Although they incited a multi-label bidding war, Git Fresh saw the most prosperous future with Def Jam Records.
“We went into L.A. Reid’s office and we performed two acapella songs for him and he was sold after that,” says Rude Boi about Git Fresh’s audition for the Island Def Jam Chairman. “I remember jumping on L.A.’s desk! He told us we weren’t leaving New York without signing to Def Jam.”
Git Fresh solidified their deal in the beginning of 2009 and quickly got started recording their debut album. Around the same time, they also joined Strong Arm Management, who also manages hit maker Flo Rida. Git Fresh’s first single, “She Be Like” is a fresh take on Suzanne Vega’s hit “Tom’s Diner” where the guys ride through the club popping bottles, while “What’s Your Favorite Place” finds them singing about their favorite places to entertain their lucky guests.
On “Earth, Wind, and Fire” the boys express their love over a moody, up-tempo track that leads into “Singin,’” a playful song that talks about mattress springs overpowering their mood music during a raucous love making session.
“We like to go out and have fun,” says Rude Boi. “That’s who we are. We’re young guys in the prime of our lives and our album is definitely a party album, it’s all about the ladies. We don’t even like to consider ourselves as R&B, we just make good music. The sound is new and fresh, it’s something that you wouldn’t expect to hear from a three man group that’s just crooning.”
Combining their different backgrounds and experiences, Git Fresh has managed to find a perfect musical balance. Citing Michael Jackson, Jodeci, and Sam Cooke as influences, Penny, Rude Boi and Pretti Sly all bring a valuable piece to their collective puzzle.
“We have a lot of different styles—a lot of crazy melodies and different influences that you’ll hear in the music,” says Rude Boi. “We could sit down in front of you and sing harmony all day or we could sing a club song so I like to think the group is extremely well rounded in that way.”
Git Fresh—A more perfect union. - GIT FRESH BIOGRAPHY