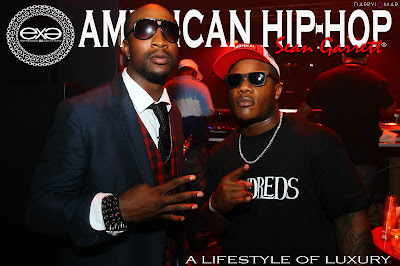 DUSHON EX DANIELS AND SEAN GARRETT HANGING OUT
BACK STAGE AFTER HIS PERFORMANCE ON SOUTH BEACH.


Garrett is responsible for a series of chart-topping compositions, most notably Usher's "Yeah!", Jesse McCartney's hit "How Do You Sleep?," which become a chart topper and one of the biggest 2009 songs, as It went on to become the 86th biggest song in the U.S. for 2009.
Ciara's breakout track "Goodies", Teairra Mari's debut single "Make Her Feel Good", Mario's single "Break Up", Nicki Minaj's first single "Massive Attack" and Britney Spears' "Toy Soldier" are written by Sean Garrett. He is in a production duo with Swizz Beatz, and together they produced several Beyoncé Knowles singles: "Ring the Alarm", "Get Me Bodied", "Upgrade U", "Check on It", "Diva" and "Video Phone". He also writes often over productions by Polow da Don. Garrett also embarked on a career as a performer,. His debut album, Turbo 919, was released June 24, 2008 on his Bet I Penned It Music imprint, through Interscope Records. (Garrett's catch-phrase, which is featured in multiple songs he has produced, is "Smash on the radio, bet I penned it".)
Ludacris appeared on Garrett's debut single, "Grippin'". In return, Garrett was featured on Ludacris's "What Them Girls Like", alongside Chris Brown. He also wrote and produced a song called "I Did It for Love" for Korean popstar BoA for her first eponymous English album. Garrett is featured and appears in the music video. In March 2010, Garrett released the first single off of his upcoming album Courtesy Of in entitled "Get It All", which featured Nicki Minaj.

So you can only imagine what kind of show he put on in south beach. The crowd was buggin, ladies where pushing to get to the front just to get a peak of Sean. But in the mix of all the madness he still put on a great show. Sean Garrett is a great example of American Hip-Hop!