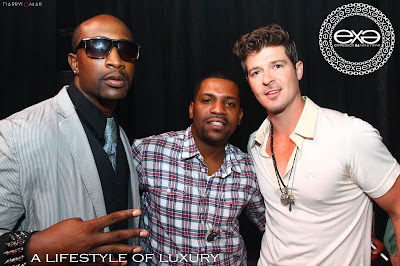 These three talented men were seen A.B.F.F. week on 400 Life Thursday at Mansion in Miami beach.

Who is Du'shon Ex Daniels? He is an American designer,model, producer and actor. Ex is CEO and lead designer of Expressive Clothing LLC the designers of Expression 06 Evolution or EX.E, the clothing brand of a lifestyle of luxury. He has been said to have revolutionized the original blue jean of today by inventing a jean patent he calls the "Side Zipper". Ex has also made cameos in Fantasia's music video Bitter Sweet and B.E.T.'s former show The Deal.  This Mogul in the making is currently co-starring in a movie called Bruthaz Keeper with no release date as of yet.

Mekhi Thira Phifer is an American actor. He is perhaps best known for his multi-year role as Dr. Greg Pratt on NBC's long-running medical drama ER and his co-starring role opposite Eminem in the feature film 8 Mile. He was a regular on the Fox crime show Lie to Me portraying the role of Ben Reynolds, before season 3, and currently stars as CIA agent Rex Matheson in Torchwood: Miracle Day.

Robin Charles Thicke is a multi-platinum American R&B Grammy Award-winning singer-songwriter, musician, composer, and actor. Thicke's albums, which he previously released under the moniker Thicke, are noted for their feature of a predominantly R&B sound. Robin Thicke has penned hits for popular artists such as Jennifer Hudson, Usher, Mary J. Blige and others. Thicke was also acknowledged for his work in popular albums such as Confessions and Tha Carter III.

Robin Thicke (Lost Without You)