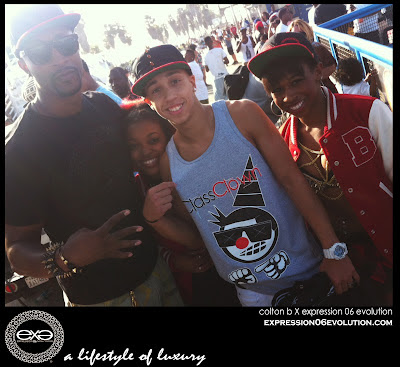 CELEBRITY DESIGNER DUSHON EX DANIELS AND COLTON B. AT THE BLAZE THE STAGE SHOWCASE ON VENICE BEACH IN CALI.

16 year old teen sensation Colton B. is already a veteran entertainer, starting his rise from the young age of four! He performed with Jennifer Lopez in the 2001 AMA’s, Outkast on the 2002 Grammys; Missy Elliot on the 2003 AMA’s, in her Work It Music Video and with her at MTV Spring Break. Also in 2003 he appeared with Missy Elliot on Mad TV and the Tonight Show, and with Lil Romeo and Master P at the Teen Nick Concert! He went on to film numerous videos with artists such as Jay Z, Kanye West, Jennifer Lopez, and more, including an appearance with Will Smith at the Nickelodeon Kids Choice Awards! One of his big dreams came true when he was chosen by Prince to play him at a young age in his Musicology video, an unforgettable experience.

Next he won NBC’s Most Talented Kid In America in his age division which prompted guest appearances on shows such as The Maury Show, the Today Show and The Ellen Show. After winning the title of Jr. World Hip Hop Champion he went on to appear on The Maury Show again and also The View. He then went on to the finals in Las Vegas at America’s Got Talent!

This busy entertainer was also busy building his impressive resume working in television, film and commercials. To his credit he has worked on shows such as Hannah Montana, Hip Hop Harry, Cory In The House, General Hospital, Disney Sing A Longs (too numerous to mention all of them!), 2011 BET Awards and three times on So You Think You Can Dance! You may remember him from his popular Burger King, Six Flags, Tostinos and Capri Sun commercials, and he just finished filming a national Cisco commercial. He was also twice recently featured on BET’s 106 N Park Wild Out Wednesday and voted winner of the Coca Cola sponsorship with BET for best Indie Artist!

The world knew Colton as Lil’ C for most of his life, but as he grew older, from being interviewed by the likes of Barbara Walters, performing with the top industry icons, and for literally millions of people, nothing about his career has been little.

He is currently finishing up his debut album which he co-wrote with award winning writer/producer Mauli B., and is dividing his time up between writing and recording, getting ready to tour, and lending his talents to many worthwhile causes in support of issues close to his heart including raising money to help the orphaned kids in Haiti. As a former foster child himself, he performs and speaks regularly at various charity events having to do with the causes of foster kids and adoption.

Colton B has been preparing all of his life for this moment. It is now time for him to meet his destiny and let the world know that the new Prince of R&B/Hip Hop has arrived!