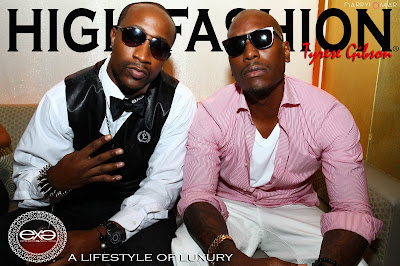 Tyrese Darnell Gibson (born December 30, 1978), also known simply as Tyrese, is an American R&B singer, rapper, actor, former fashion model and MTV VJ. After releasing several albums, he transitioned into films, with lead roles in several Hollywood releases.  He appeared in the 2007 action film Transformers. The film's director, Michael Bay, had Gibson in mind for the role before he was cast, and thus Gibson did not have to audition for the part.  In 2009 and 2011 he reprised his role as Air Force Chief Master Sergeant Robert Epps in Transformers 2 and 3.

Dushon Ex Daniels tells us that meeting Gibson was very inspirational to him because he has watched Gibsons career since he was given the role originally intended for Tupac Shakur in the 2001 film Baby Boy . "Over the years i see myself going down the same route  except i can't sing a chicks panties off!" says Daniels... Daniels is co-starring in his first film called (Bruthaz Keeper) and he  says that  he only hopes to reach the success that Tyrese Gibson has reached in his great acting career.